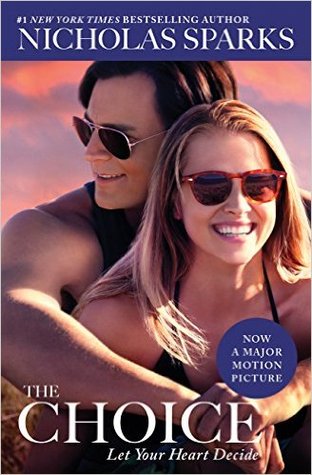 #1 New York Times bestseller Nicholas Sparks turns his unrivaled talents to a new tale about love found and lost, and the choices we hope we’ll never have to make.

Travis Parker has everything a man could want: a good job, loyal friends, even a waterfront home in small-town North Carolina. In full pursuit of the good life – boating, swimming , and regular barbecues with his good-natured buddies — he holds the vague conviction that a serious relationship with a woman would only cramp his style. That is, until Gabby Holland moves in next door. Spanning the eventful years of young love, marriage and family, THE CHOICE ultimately confronts us with the most heartwrenching question of all: how far would you go to keep the hope of love alive?

The Choice by Nicholas Sparks

“Spending time with you showed me what I’ve been missing in my life.”

I watched the movie 4,5 years ago so I didn’t remember most of the story. I enjoy Nicholas Sparks writing and the way he put magic in his not-extra ordinary stories, But after reading this book I realised that I should give his books a space now, They all starting to give me same vibes, I read A bend in road and The choice in a month, both stories deals with grown-up people, which is not the thing I enjoyed most, First half of the book I enjoyed that was so fun and sweet, but something in the stories aren’t clear for me like I wanted to know more about Kevin what was his reasons, and what exactly happened with him. Gabby was not innocent she was cheating on him whatever was the reason, I had the feeling If the story was told by Kevin POV it could be similar to Dear John, Kevin also had faults, but the story didn’t show many except he is avoiding a real relationship.

“How far should a person go in the name of true love?”

The second half was kind of boring, It was so dull and slow compared to the first one, Well it is strange but story was slow and fast both a time, Story moves so fast that I didn’t have any idea for few pages that what happened, but it was also slow which makes me annoyed, It lost the chemistry between Travis and Gabby. I expected more from the ending.

I didn’t completely hate it but It definitely wasn’t my favourite.

So bye-bye Nicholas Sparks, I’ll meet you at the end of this year or next year, I hope in this way maybe I’ll enjoy your books more.

“Stories are as unique as the people who tell them, and the best stories are in which the ending is a surprise.”