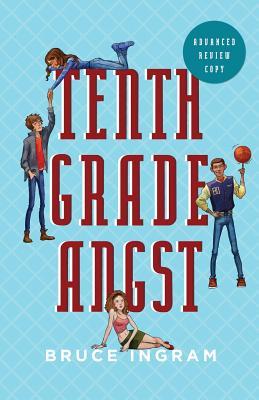 Tenth Grade Angst (a sequel to Ninth Grade Blues, 2017) continues the story of four teens as they negotiate the roller-coaster ride of high school. Now sophomores, they grapple with growing independence and changing dreams and ambitions. Luke: a shy, hard-working boy from the wrong side of the tracks, Luke continues to come out of his shell with the friendly encouragement of Mia. His love for hunting, fishing, and all things nature-related keeps him sane and grounded, while ongoing problems with his dad worsen. Elly: a bit overweight and a lot insecure in her freshman year, Elly joins her mom at the gym, sheds a few pounds and discovers she can set her cap for star football players. But is that always a good idea? Marcus: a football and basketball star, Marcus comes down to earthdiscovering that there are limits to his athletic career. And, a series of rebuffs lead him to reflect on the best way to a girls heart. Mia: a straight-A student who looks like a good bet to be the class valedictorian, Mia is also on track to realize her dream of becoming a pediatrician. But just how angry will her poppa get if she insists on dating Luke?

Thanks to NetGalley for providing me with a digital arc in exchange for an honest Review!

People who are following me, They must know how I mostly start to read a book a before realizing that is a part of series, So again here I am in that situation, In My Defence, it didn’t feel like a sequel until the end.

The starting was good, I won’t say that this book got a story because it was just chain events of some people having different background, thoughts, problems and struggles who are in the tenth grade in the same school.

The writing style was irritating, I lost my counting how many times word Biggest and Longest were used in this book, it really irritated me. There were only two interests in this book Driving and Sports (Football &Basketball), It was so annoying to read everything again and again, Events were repeated and I was like Okie leave it, I got it, why repeating again and again.

LUKE&MIA- Luke a native American, from a lower family, whose father is abusive and mother is cancer patient, but a good boyfriend and do everything Mia wants to, he is working on his grades because She wants to.

a Mexican-American student with straight A’s and girlfriend of Luke, everyone in her family knows about Luke except her father, because he didn’t want her daughter to date and White boy.

Luke and Mia are likeable characters, they both don’t have money, they work together, earn together, take care of each other in every small possible way. Their dates are so cheap because they are saving for college. The good thing about them is they are so real, not like in most of YA where everyone is rich or one poor one rich, where they have to hide their problems from each other.

Elly- an overweight, desperate girl, who happens to be a friend of Mia, Her character is so annoying, her parents are well off, She doesn’t do any thing excpet going on dates with everyother guy who ask her, because she doesn’t have any self-respect, She was dating paul and broke up with him, becuase she didn’t like him, then she went out Jonathan because he ask so, then another, but in real she like Caleb, and lost weight in hope that he will notice her, and he does because he is this shallow and show-off flirt person and going out with him ignoring the reality, You got the concept, How annoying she is.

Marcus- His life is so boring, Okie starting was good, he wasn’t a good person, every girl broke up with him, his grades are not good and he caught doing cheating, so he is rehabilitation phase now, where he is making up for all of his bad behaviours.

The end was sudden *Snap*, So obviously there will be Trequel, sorry I am not interested anymore.